50 Cent is never one to ever bite his tongue and it seems he now has his eyes set on Jim Jones again. Via instagram 50 made a post exposing Jim Jones for being an government informant in the 6ix9ine, Mel Murda, Shotti case. All this comes from Jim Jones jumping on Trav's live and co-signing what Trav was saying about 50 Cent. Well now 50 has exposed Jim for being an snitch in the case against Mel. 50 also let it be known that he is the reason why Mel Murda got a deal with the judge. 50 says he spoke to the judge and got the deal for Mel. Check out the post below from 50 and tell us what you think!

Star Brim — real name Yonette Respass — was one of 18 defendants named in an indictment of gang members in the Southern District of New York Tuesday. She is accused of being the highest ranking female member of the gang and is charged with slashing a person and participating in a racketeering conspiracy. Many of the gang members named in the indictment have been arrested, Brim was not as she is expected to give birth in the coming days. Prosecutors say they are in discussions with her attorney regarding a time and date for

50 Cent leaks a video on his verified instagram account and it has fans going crazy. 50 has released a leaked video from his hit tv show power and it reveals who shot Ghost. In the video you see Tasah, Ghost wife in the show pulling the trigger. No word yet on why 50 has leaked this episode but he did. Check it out below for yourself and tell us what you think!

Video has been released of T.I.'s 15 year old son King getting into a full fledged fist fit in his high school bathroom. In the video King is fighting a kid wearing a Sniper Gang hoody. Much respect to King for standing up and holding his own, but he deffinitely got beat down. Check out the video below

According to TMZ, 6ix9ine’s legal team is asking the judge to allow him to serve the rest of his sentence under home confinement or in a community correctional facility. 6ix9ine believes he’s in serious danger behind bars due to him snitching on Nine Trey Bloods gang members. 6ix9ine has told people close to him that Shotti and Mel Murda have been sending real threats his way. Promising they will get him in Prison! He was sentenced to 2 years in prison back in December for his involvement with the gang. He has already served 14 months in prison and is expected to be released in late 2020.

Promoter Ken Carey who is suing DaBaby for $400K has been exposed as Janky Promoter by Lil Durk and DJ Meat5z, Carey is bragging on facebook

Concert/Club promoter Ken Carey name is all over the headlines, thanks to a beatdown he received via DaBaby and his crew feet/hands. Ken Carey is being accused of shorting DaBaby $10,000 for a club hosting at Cafe Iguana's in Miami. Well this is not Ken Carey's first time robbing artist. About 3 years ago Lil Durk and his crew almost killed Ken Carey for not being paid all of their money for a show in New Jersey. Popular radio/club dj "DJ Meat5z" was the DJ for the night and he tells us he never got paid and to this day Ken has been ducking him. Ken can be seen on Facebook bragging that he is about to sue DaBaby for $400,000 after DaBaby and crew beat his ass. Check ou the screen shots below.

50 Cent is back to his trolling ways on instagram and man is it exciting. 50 who posted his brand new Buggatti on Instagram last week, is not for other fronting. Today via his verified IG page, 50 exposed French Montana for lying. French posted a video of his Buggatti being dropped off to him claiming it was a 2020 and he was the only one in New York with it! Well 50 has called French out for fronting and exposed him for having a 2010 Veyron not the 2020 Chiron. French of course commented back calling 50 a old hating dinosaur. Check out the back and fourth below from both rap stars.

When Dwyane Wade made the choice to enroll his son in Sierra Canyon he thought it would help him get to the next level, but now it seems D Wade is regretting that choice. D-Wade's oldest son Zaire Wade is a senior on the Sierra Canyon basketball team and he gets no playing time! Its been multiple games that Zaire got 0 minutes. Sierra Canyon is loaded with 5 star recruits and Zaire only being a 3 star doesnt help. Lebron James oldest Bronny James goes to Sierra Canyon also and he comes off the bench, but Bronny is a freshman and he gets more playing time then Zaire.

Tekashi 6ix9ine's Dad spoke out to the media and he let it be known what he felt about his son remaining locked up! 6ix9ine's Dad revealed he was happy that his son will still be locked up for atleast another 11 months. 6ix9ine's Dad said "I feel glad that he's safe in there, you know what I mean. Because, in there, nothing is gonna happen. Outside, they're gonna try to kill him because of all the stuff that he was saying," he said. "It's a scary situation. He's a target. He cannot hide. Because his face, tattoes, 69, he can't go nowhere." 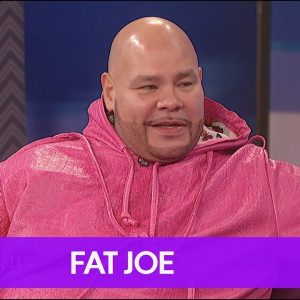 When asked about the death of Juice WRLD from od'ing on pills, Fat Joe seemed to admit that he smoke crack cocaine. It may make sense now to how Fat Joe lost all the weight he did. No word yet from Fat Joe about what he said on Wendy Williams show yesterday. Check out the video below showing Joe speaking on smoking crack!