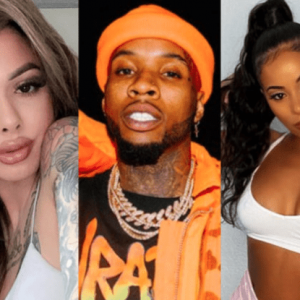 Celina Powell gets beat up by Kaylin Garcia over Tory Lanez

Hip Hop groupie Celina Powell reportedly got in an altercation with Kaylin Garcia over rapper Tory Lanez. Well apparently Celina and Tory Lanez live in the same condo in Miami and Celina clowned Tory Lanez over his hairline. Celina Powell also posted Tory Lanez number and bragged about taking his money! Tory Lanez finally caught up to Celina outside their condo and Tory was with his alleged girlfriend Kaylin Garcia and thats when things went left. Celina tried to run but Kaylin caught up to her and started beating the breaks off of her. Celina claims she was knocked out in the attack and when she woke she had serious back and neck pain. She didn't immediately go to the hospital, but eventually got medical treatment for her injuries. Sounds like a lawsuit is on the way and police are currenlty investigating. The altercation was not caught on camera but the condo has video of Tory and Kaylin fleeing the scene! Check out the injuries Celina claimed she received during the fight!