Former stripper now rapper FTN Bae also known as Curly Red was just released from jail after stalking her ex-boyfriend Doodie Lo. Doodie Lo who is signed to Lil Durk's OTF was accused of raping FTN Bae 5 year old son by putting screws/nails inside his butt. Well it seems maybe FTN Bae was lying because Doodie Lo broke up with her. FTN Bae was arrested for stalking Doodie Lo. Who would stalk someone begging them to take them back if they really raped their 5 year old son. Check out everything below.

Police reveal that Kay Flock's DNA and fingerprints were found on the murder weapon after he tossed it while running from the police. No word yet on if this will deny Kay Flock any bail, but this definitely is not good news for the young New York rapper. Stay tuned for more updates!

Today the music industry lost another superstar in Young Dolph. Young Dolph who was only 36 years old was shot and killed outside of a Memphis cookie shop that he supported. Dolph was reportedly getting cookies for his mother. The videos below are very graphic and sad!

Diddy is on a his 25 and under dating spree and right now he has his eyes on Bow Wow and Future's baby mother Joie Chavis. Joie Chavis and Diddy have been seen on vacation boo'ed up a lot recently. After seeing all this in the media like us, Bow Wow did a radio interview to clear up the rumors and Bow Wow said that he already called Diddy and checked him about it. Check the interview below! 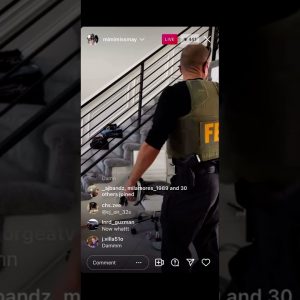 Omi in a Hellcat who is a popular Youtuber that made over $100 Million dollars selling cheap cable has been arrested by the FBI. Video shows OMI's girlfriend Mimi filming while his door was being kicked in. It seems Omi and Mimi were naked, because both asked to put clothes on. Check out the video below and let us know what you think!

Fat Joe verse Ja Rule was a big event that went down Tuesday night and we had a wow moment when Nelly approached his ex Ashanti asking for a hug. Of course while on instagram live with her, Fat Joe & Ja Rule wanted Ashanti to spill the tea and ask if they would get back togehter. Well Ashanti let it be known that can not happen because she is in a relationship with pop star Flo'rida. Check out the video below and tell us what you think!

Rod Wave and SayCheeseTV CEO Shawn Cotton are back getting into it via social media. Shawn recently did a interview with VladTV and during the interview he revealed that he was the main reason that Rod Wave got signed to Alamo records.

21 year old rapper “Indian Red Boy” was shot and killed in the drivers seat of his car while on IG live with a friend… allegedly he disrespected Nipsey Hussle’s mural by painting over it. There’s rumors flying around that this was retaliation due to him disrespecting Nipsey Hussle's mural, and painting over it. Check out the video below and tell us what you think.