Former Roc-A-Fella/State Property rapper Oschino Vasquez new podcast "Deeper Than Rap" had a special guest his former label boss Dame Dash. On the episode Oschino had Dame Dash and of course the topic of Jay Z comes up. When asked if he would ever work with Jay Z again Dame had a pretty agressive answer. Check it out below

If you follow Dame Dash on instagram then you know he films his whole life and did filming save his life in this case. Dame via instagram released a video which showed the photographer Monique Bunn who is suing him for $50 Million dolla, stealing from Dame. In the video you can see a heated arguement which shows Dame questioning Monique Bunn about her stealing/lying. Check out the videos below and tell us what you think!

Adam 22 revealed via his verified instagram account that he made over $10,000 for his now famous Dame Dash interview on his No Jumper podcast. Adam who only paid Dame $500 dollars, has come all the way up pocketing $9,500 dollars profit. Check out the video below where Adam confirms what he made, after he commented on a DJ Akademiks instagram post that he made $10,000 for it

Damn! While hating on Jay Z and his new deal with the NFL calling saying "Jay aint shit" info leaked that Dame Dash was paid $500 dollars for his Adam 22 interview. Dame did not want this info to get leaked, because it shows how broke he now is and how hot he is with a peanut price tag of $500 dollars.

Lil Wayne and day time tv sports host Skip Bayless have become very close friends. Skip is the host of the hit day time sports show "Undisputed" which airs on Fox Sports 1. Wayne also sings the shows theme song titled No Mercy. Wayne was recently a guest on the show a couple weeks ago and now it has been reveald that Wayne gifted Skip a $50,000 diamond necklace. Check out the post from Skip showing how thankful he is for the gift from Skip.

Wack100 like we said many of times before, has never bite his tongue when it comes to speaking his mind. Via his verified Instagram account Wack100 let it be known that he is not feeling Dame Dash. Wack called Dame a bitch ass nigga who sits down when he pisses for hating on Jay Z and his new deal with the NFL. Check out Wack's post below for his full comments against Dame Dash. 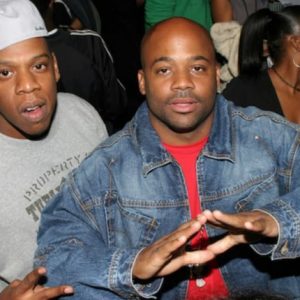 Dame Dash recently sat down with Adam22 and his No Jumper podcast. Of course Adam asked Dame about Jay Z and the NFL deal he stole from Jermaine Dupri. Dame replied "Everybody knows Jay ain't sh**," said Dash. "It's a common knowledge Jay ain't sh**," claiming that everyone in the industry holds this sentiment and added that Hov is only about self-preservation, and "the bag."