Famous Dex is in hot water as he pulled a gun out on college students at UC-Irvine in California. The school held their annual Shocktoberfest which ended up being shut down after Famous Dex went into the crowd and students bum rushed the stage. YG was scheduled to headline the show which clearly didnt happen […]

Ashanti had some of the biggest hit records back in the early 2000’s but it that didn’t matter at Stony Brook University. Stony Brook University has its annual Back 2 Brook set for next week which had only sold 24 tickets as Ashanti was the headliner. Last year the school did Post Malone which was […]

Tory Lanez punches fan at a show in Toronto

Tory Lanez shows are always lit to the max and we all know Tory likes to go in the crowd and perform. Tory Lanez made a Toronto stop for his Memories Don’t Die Tour on July 4th where he ended up punching a fan in the face multiple times while crowd walking. Its unclear who […] 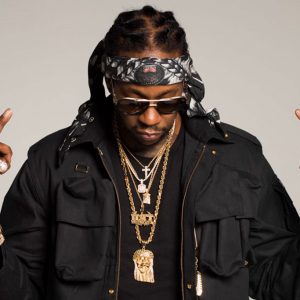 2 Chainz had some words for the Governor’s Ball event coordinators and graphics team. After his verses were left off Eminem’s Revival album and Quavo and Travis Scott’s Huncho Jack, Jack Huncho release, he had something to say about a promotional flyer for this year’s Governor’s Ball festival in New York City. 2 Chainz went […]

Offset proposes to Cardi B on stage at Powerhouse in Philly

Cardi B is having the best year thus far with having a Billboard #1 record with “Bodak Yellow” to getting engaged to Offset of the Migos. Offset proposed to Cardi B at Powerhouse in Philly yesterday in which Cardi was overjoyed. The two definitely seem in love and were happy for the couple. Not only […]

Kodak Black had his official First Show Out at the Watsco Center in Miami Fl tonight. The sold out show had special guests such as Young Jeezy, PnB Rock, Ball Greezy, 1804 Jackboy, & more. Kodak Black went through numerous tracks from his catalog from Project Baby, Heart Of The Projects, Instituion, and of course […]

Fetty Wap Fires Assistant After He Says She Stole $250,000

Fetty Wap accused someone in his camp of stealing money from him, and he fired that person. TMZ reports that the ‘Trap Queen’ rapper terminated Shawna Morgan this past Friday from his RGF Productions and accused her of pocketing $250,000. Fetty said Morgan lied and told people that she was his booking agent and manager, […]