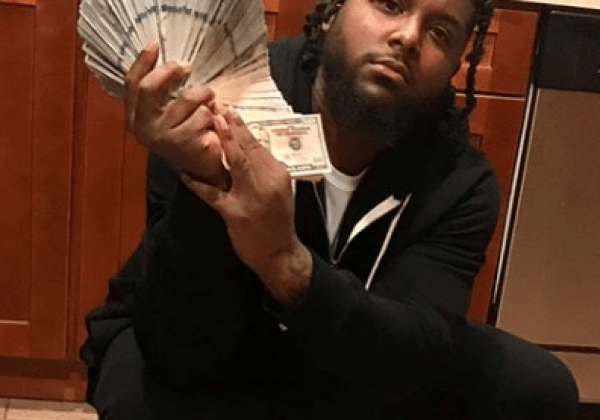 ItzYungBaby: I was in Chicago doing a record with Sasha Go Hard called “Convo.” I was in the studio drunk, playing around just having fun how I always do. On the intro of the song I just kinda screamed Itz Yung, Itz Yung baby. Ever since then it just stuck with me. I felt like it was too many artist named YUNG anyway. So I just said fuck it, I’ll throw it all together to make it look different.

ItzYungBaby: I’m from the Eastside of Detroit, Michigan. Born and raised. Currently living in Milwaukee, Wisconsin,

ItzYungBaby: Growing up I really didn’t have any musical influences. Honestly, Bow Wow was the only artist who even got me started rapping. Shit, I just know when I was in the 6th grade I came to school and all the females had his posters. I was like if rapping get you girls, lets do it then! From there that’s when I started my journey.

HHO: What hip-hop albums did you grow up listening to?
ItzYungBaby: Too be honest, I don’t really remember what hip hop albums I use to actually listen to. I never was the album type of guy. Maybe a few songs here and there, but never an album. I was the type who would burn the hottest songs to a cd and just ride around to it. I use to play artist like Lil Wayne, Dip Set, Jay Z, Fabulous and etc.

ItzYungBaby: Honestly….Right now I’m not really promoting any particular single. I just release records as I record them. When I first started out, I use to get caught up in recording all these records then I would end up just sitting on them, trying to save each record for an album. You know, trying to be perfect. Then what ends up happening is that I would disappear for a couple months and then come back and repeat the process. After doing that so many times, it felt as if I was hustling backwards. You leave, then people forget about you. Plus who’s really checking for an unknown artist album anyway?? Lol. So now I have the mindset of boom, record the song. Shoot the visual and just flood the internet. Every song I record I don’t hold on to it. I just drop it!

ItzYungBaby: My dream collaboration would prolly have to be with Drake. Come on now. Who wouldn’t want a record with Drake? I just feel like that would be an automatic hit!

ItzYungBaby: At the moment I don’t have anything planned. Especially with this Covid 19 virus going around. I just mainly been focusing on writing so once this pass, I can get back to the studio and drop records.

ItzYungBaby: My fans fuck wit whatever I drop. I think my style of music is just so different from what everyone else does that you really have no choice but to be like who is this? I don’t sound like your average “Detroit” rapper. My flow is very versatile. I really can’t be defined as an artist. So whenever I drop a new record, it seems like everyone be tuned in to hear what’s next.

ItzYungBaby: Ummm…I’m really picky when it comes to who I listen to. For me, I can’t just listen to an artist based on music. I like to watch interviews and really get to know the artist. Each artist puts me in a different mood. Right now though I listen to Russ, Meek Mills and Drake.

ItzYungBaby: I hate planning because it never works in my favor. Ha. But on a serious note, I think this year I’m just gonna continue to do what I’ve been doing. Just releasing records. Eventually the right ear will hear and see the potential I have. I’ve never been the type of artist who hops on bandwagons and shit. I stay in my own lane and just focus on me. I think that’s why sometimes it’s kinda hard for people to understand me. I rarely do interviews. I think the last interview I did was 3 years ago with DJ Smallz. I just be lowkey. Nowadays artist just be doing shit for clout man. It’s crazy. I just let the music speak.

ItzYungBaby: I would tell any upcoming artist to just stay positive. Remember. Everything doesn’t have to be rushed. People will appreciate you for the dope music you create. Stay true to yourself and don’t follow trends. People like different. Don’t be afraid to be that.