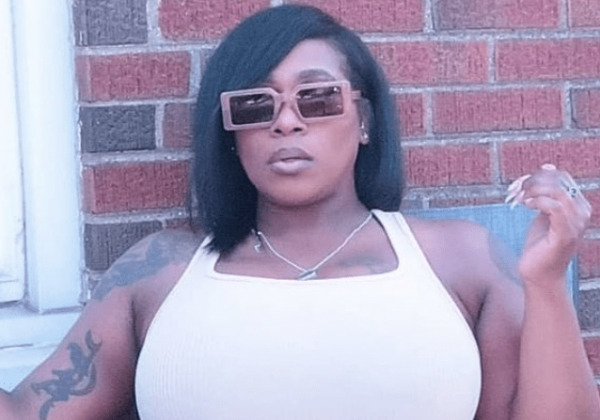 BLVSH: I played in makeup a lot as a kid, my mom used to make fun of me, kept calling me “Blush girl”, so I dropped the girl and added the “Fuego” cuz I’m fire af. Lol

BLVSH: Grew up South Side of Chicago. 84th, Stony.

BLVSH: Oh my God…Gucci Mane !! He literally laid the groundwork for me I also loved Nicki a lot growing up, gotta love her. I’m really inspired by the mega stars, it’s one thing to be successful but I believe they mastered it.

BLVSH: Of course you know I grew up listening to Trap House and EA sportscenter cuz I’m a Gucci stan. Being from Chicago I listened to a lotta Twista, and the Black Album by JayZ will always be a favorite of mine. I actually listened to a lotta raunchy ass music as a kid, compliments of my mother lol. AMG and Too Short was definitely on repeat in mom’s car.

BLVSH: My current single out is a remix to Trina’s “Naan Hoe”, go check that out. Shot out to her. I had fun remaking the classic. I feel like that song is timeless so it’s like why not. Also it was a challenge because I had to get a lil nastier on there than I normally am in music, so you definitely getting a lot of that on this record.

BLVSH: A producer I met online sent it to me. It sampled parts of the song and that sent me writing, like a good beat…. Both verses took 30 mins and I laid em right then and there.

BLVSH: My dream collab would be with an artist that’s extremely established. This why I’m a fan of Gucci’s. Watching him showed me some of the business behind the music. He was one of the 1st rappers I know to own they masters. I’m like damn, this man getting it and he get to keep everything he make. He glamorized that shit for me lol.

BLVSH: I’m currently working on touring down south. Got a couple of things popping in Texas and Florida. I love to do shows in my city so I’ll keep you all locked in with the dates on those.

BLVSH: The fans and DJs support me a lot.  I’m super close with several of the DJ’s in my city, S/o Kceas and BigPat RIP.  The DJs always show love and support, lots of other Chicago artists support me too. I think the fans identify with me because I tell some of our truth, culturally. I don’t have much of a filter at times so I say things that most people think but wouldn’t dare to say. That kinda made me the leader in that sense. Also my persona is a little different, I have a different look. People support me because I embrace the fact that I look different.

BLVSH: Right now, I listen to a lot of Brent Faiyaz, Xavier Omar, Durk of course. Oh, and Ari Lennox, that’s my girl. My music change a lot based on my mood so I listen to all different kinds. One day I’m screaming Durk and the next day I’m singing gospel lol

BLVSH: I’m always dropping music so I’mma turn up the heat on that and by 2022 yall gone see me pushing out more visuals, really tapping more into my creative side. Trying to bring yall the best BLVSH I can.

BLVSH: S/o everybody that support and play my music, yall the whole reason I’m doing it