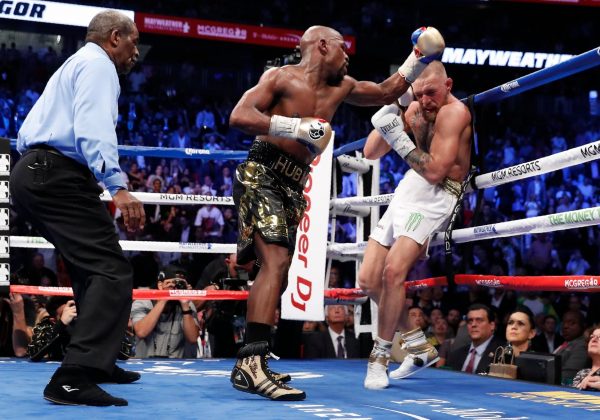 By the looks of things, retirement was treating Floyd Mayweather Jr. well.

He had a stable of boxers to promote, businesses, including a new strip club, to run, and a vast collection of luxury cars to enjoy. But there is a reason he embraces the nickname “Money Mayweather”: His brand was built as much on personality and spectacle as on skills in the boxing ring.

So when a rivalry with the mixed martial arts star Conor McGregor was manufactured over social media, Mayweather, 40, was more than happy to end his two-year retirement and to collect one final, potentially record-breaking paycheck. And he did it in the style that virtually everyone expected.

After allowing McGregor — 29 and boxing professionally for the first time — to come at him with awkward, slapping punches early in their fight, Mayweather took control in the middle rounds. He never looked back. He bloodied McGregor with a barrage of right-handed bombs, leading the referee to stop the fight just over a minute into the 10th round on Saturday night at the T-Mobile Arena. The victory left Mayweather with a 50-0 record as a boxer, and dropped McGregor’s mark to 0-1. (Yes, 0-1.)

Not only did Mayweather set himself up for a handsome paycheck expected to exceed $200 million, but he also ended a career as a defensive master with a performance that was decidedly offensive. This was Mayweather exorcising the demons of his previous megafight, against Manny Pacquiao two years ago, which proved to be dull to its broad, mainstream audience.

Continue reading the main story
No levelheaded analyst thought that McGregor — a champion in the Ultimate Fighting Championship who has a 21-3 record in the mixed martial arts — stood a chance against the greatest boxer of his generation.

Many purists saw the contest as a farce, nothing more than an exhibition. While Mayweather did all he could to hype up McGregor as a legitimate opponent, he also said that he had taken the fight for the money.

And many experts offered dire predictions — that McGregor would not land a punch, that he would be knocked out within a few rounds.

McGregor admitted after the fight that he was fatigued, but he said he thought that the referee, Robert Byrd, had stopped him too soon. Credit Christian Petersen/Getty Images
In that light, the fight can be considered somewhat surprising, and McGregor, a native of Dublin, can claim a moral victory. He won the first round on all three judges’ scorecards, and the second and third rounds on one card. Still, McGregor’s early success may have been nothing more than Mayweather’s baiting him into a trap — a rope-a-dope of sorts, as made famous by Muhammad Ali.

“Our game plan was to take our time, go to him, let him shoot his shots early and then take him out down the stretch,” Mayweather said.

In the U.F.C., the longest fights are five rounds of five minutes. This bout had a maximum length of 36 minutes, and McGregor had been fighting for a little more than 28 by the time the referee called a halt. McGregor admitted afterward that he was fatigued, but he said he thought that the referee, Robert Byrd, had stopped him too soon.

“Let the man put me down,” McGregor said. “That’s fatigue, that’s not damage. Where was the final two rounds? Let me walk back to my corner and compose myself.”

After allowing McGregor to come at him with awkward, slapping punches early in their fight, Mayweather took control in the middle rounds and never looked back. Credit Steve Marcus/Reuters
Despite McGregor’s claims that he wanted to continue, Byrd appeared to step in just in the nick of time.

Shortly before that, Mayweather, standing tall, thrust his fist squarely into McGregor’s chin, and the Irishman stumbled backward. Mayweather continued to lurch forward, firing off peppery left-right combinations that left McGregor dripping with blood. He staggered into the ropes, and Byrd called an end to the fight.

“He’s composed,” McGregor said of the opponent he had promised to knock out within four rounds. “He’s not that fast, he’s not that powerful, but boy is he composed in there.”

At moments, Mayweather did not look quite as sharp as usual, eating shots as he drew close to McGregor. But Mayweather did not seem at all bothered by McGregor’s punches, though he occasionally appeared frustrated when they grappled and McGregor hammer-fisted him on the top of his head.

Although there were many empty seats amid the crowd of 14,623, the bout was expected to surpass the record earnings from Mayweather’s fight against Pacquiao. That fight generated more than $600 million in revenue from a combination of pay-per view purchases, ticket sales, sponsorships and merchandise. McGregor was looking to pull in more than $100 million from Saturday’s fight, around half of Mayweather’s projected payday.

If the event was considered a mismatch as a fight, it was a more even contest of promotional antics.

The fighters could not be more different on many levels. Mayweather, from Grand Rapids, Mich., grew up in a boxing family, the sport embedded in his DNA. McGregor had a brief experience with boxing as a child before turning to mixed martial arts full time as a teenager.

But their personalities are very much the same. Bombastic and vulgar, the two men have built reputations as much with their embrace of the bad boy persona as with their fighting skills.

Mayweather often draws crowds that just want to see him lose, whether because of disdain for the way he flaunts his wealth or disgust over his history of violence against women. 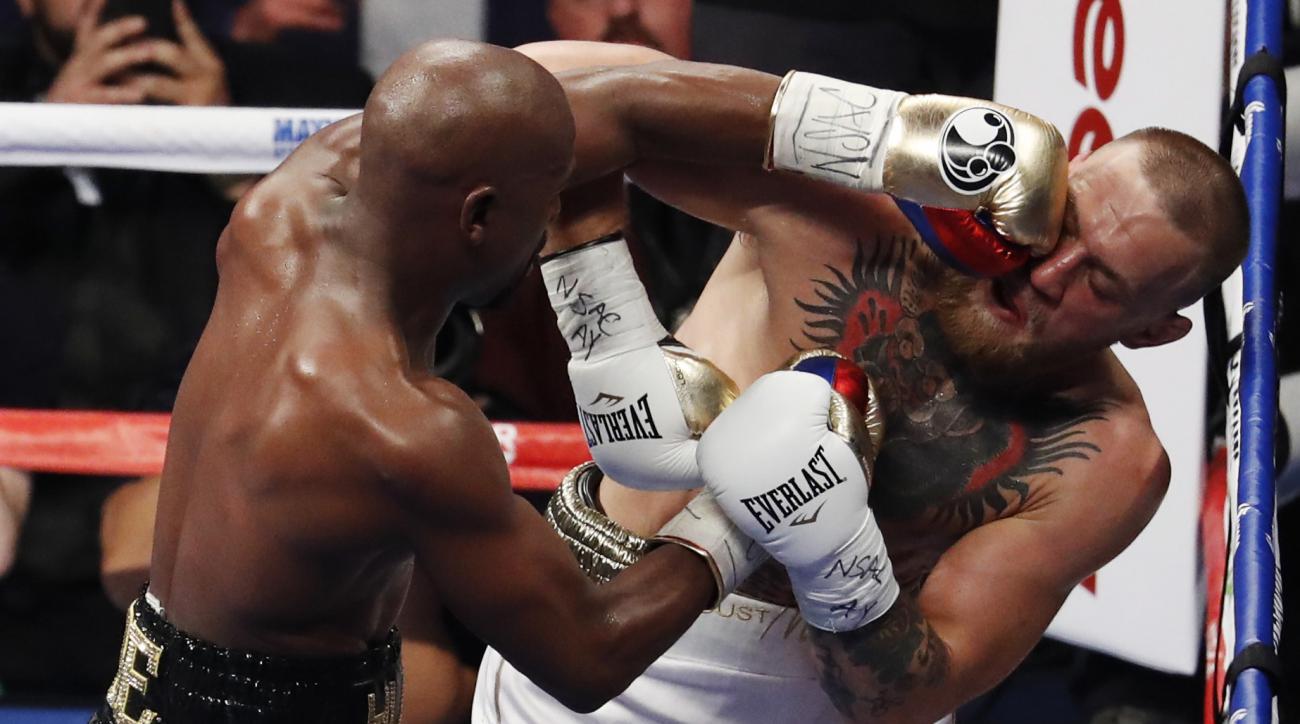 Mayweather certainly drew plenty of detractors here, mostly Irish fans, many of whom spent the weekend rambling along the Strip with their country’s green, white and orange flag draped around their bodies. During the weigh-in on Friday, they chanted as if they were at a soccer match. Some of those fans chanted “49-1,” what they hoped Mayweather’s record would be after Saturday night, and they used an invective when referring to the boxing star.

But in a nod to Mayweather’s promotional savvy, he was able to get an applause after the fight from the very people who had been swearing at him earlier.

“I want to thank all the fans from Ireland and all the fans around the world for coming to see this event,” Mayweather said. “I couldn’t do any of this without the fans.”

And, Mayweather insisted, it was the last time he would do this.

“This was my last fight tonight,” he said. “For sure.” 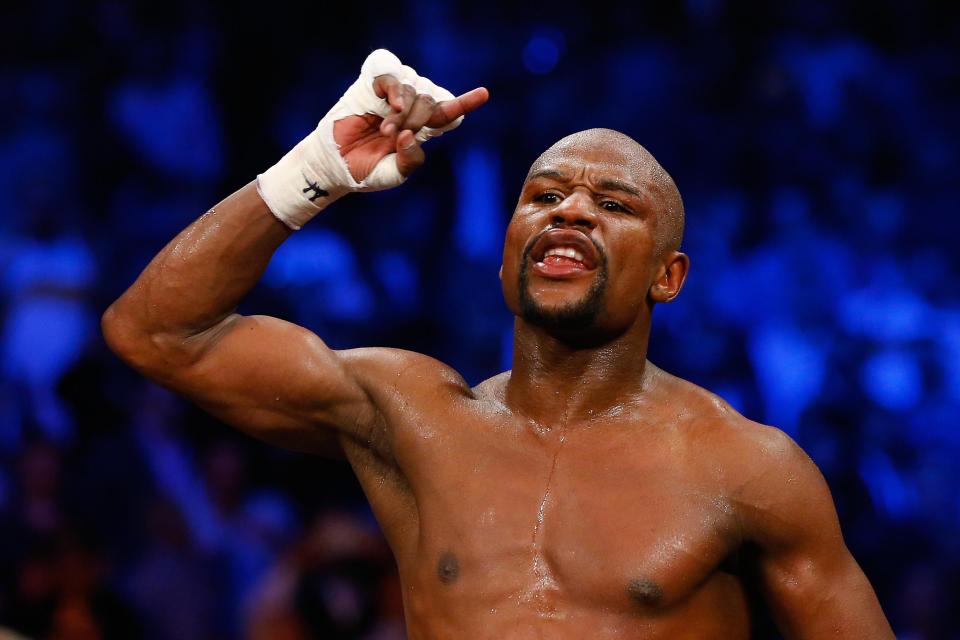