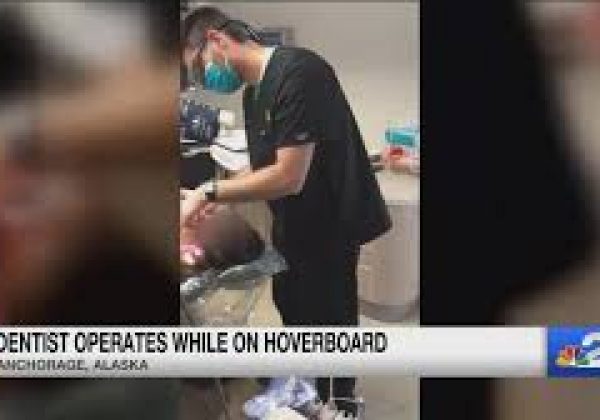 An Alaskan dentist has been sentenced to 12 years in prison after he was convicted of performing a stunt by extracting a patient’s tooth while riding a hoverboard. Seth Lookhart’s arrogant display led to his arrest and eventual conviction of reckless endangerment, illegally practicing dentistry and medical assistance fraud.

“In reviewing all this over and over again, I have this visceral response — you darn near killed some people,” said Judge Michael Wolverton during Lookhart’s sentencing. The cellphone video from 2016 captures Lookhart performing the extraction on the hoverboard before riding off triumphantly after pulling the tooth. NBC News reports Lookhart shared the video with at least eight friends and characterized his actions as the “new standard of care.”

Lookhart has also been banned from practicing dentistry for 10 years!

HOW TO LOSE YOUR MEDICAL LICENSE IN 10 SECONDS. This dentist unknowingly filmed his patient and extracted her tooth while on a hoverboard. Your career is more important that a vid to get you some Insta likes #besmart #dogood #medicine #doctor #socialmedia #ethics #hipaa #meded pic.twitter.com/lviNrxUXE6